We are delighted to have received the letter below from the Minister of State for School Standards, congratulating Kingsdale on the very high numbers of students entered in 2018 for Ebacc subjects and languages GCSEs.

Please click on the image below or the link at the bottom of the page to read the letter in full. 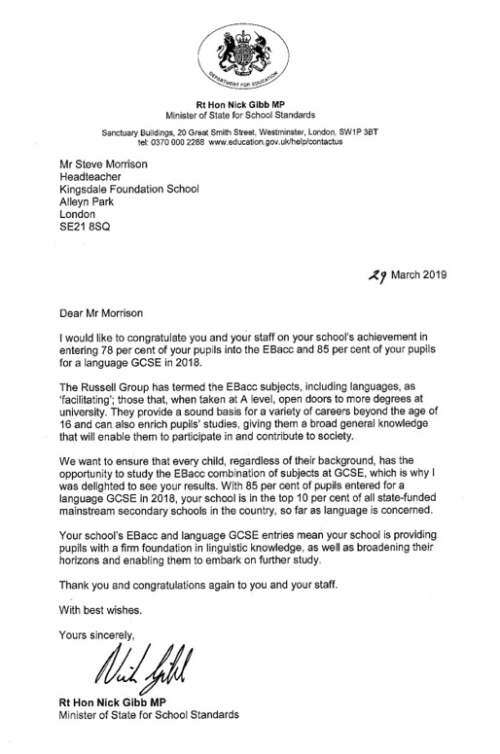 The Languages Department at Kingsdale Foundation School has expanded greatly over recent years and we are now proud to be one of the few Languages Departments in South London which is able to offer a choice of four languages as part of the curriculum to all pupils entering the school. Pupils now have the option to study French, German, Spanish and Latin at Kingsdale. It is expected that pupils will choose two languages to study when they enter KS3 and will continue with at least one language to GCSE level. All four languages are also offered at A Level.

The following links take you to the Exam Boards we use at GCSE and A-level:

By visiting these websites, you can find links to Past Papers and a wealth of information about the exams, including grade boundaries, assessment information and the Specification

There are many Internet sites to learn languages on line, but we recommend www.memrise.com and www.quizlet.com in particular.

For further information about the faculty, please contact Ms Evans, Head of Languages via languages@kingsdale.southwark.sch.uk

The Kingsdale Foundation is a company limited by guarantee and registered in England and Wales. Company No 07407844 Registered Office: Alleyn Park, Dulwich, London, SE21 8SQ